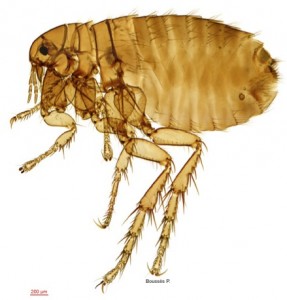 The Beginning Of Our Story….

So, I have two incredible Siberian Huskies (named Tsunami and Avalanche) and one bad ass Tortie Ragdoll cat (named Famine). Famine was rescued when she was about 8 weeks old. She was found in an abandoned building. Someone broke into the building to get her when they saw her through a window. Her stomach was extremely distended and her eyes were swollen shut. We adopted her less then 2 months after she was taken from the building. She had never been to a vet. We were told she was between 8 and 10 weeks old. Imagine our surprise when we found out she was actually 4 months old and weighed less than 3 pounds. She was completely polluted with worms. As a result of an eye injury (prior to us adopting her) she is now completely blind in one eye. She is an AWESOME completely indoor cat. In all the years of owning our dogs (8 years to be exact) we have NEVER had any issues with fleas…..EVER!

The Biting Part Of Our Story….

We noticed Tsunami (our female Husky) started biting at a patch of her hip and I noticed it was getting infected. I took her to the vet on the second day after we found the spot. Imagine my horror when my vet tells me that the area on Tsunami is actually a “hot spot” caused by fleas.

But as they shaved the hot spot, I was told several fleas fled the scene of the crime. There was no denying it. We had fleas. Funny part was that the dogs and kitten were not even scratching or biting themselves. Defeated and a $100 poorer, I got to take my flea ridden pup home with an antibiotic and steroid cream.

Where did they come from was the next dilemma we needed to solve. At first we thought it had to be the newest addition (Famine). It did not take long for us to realize that we would have been completely polluted with them by now if that had been the case. So what else did we bring into the house that could have caused it?

If you read my blog regularly, you know that I am an unlucky member of the PTSD society. If you want to read my post about PTSD, check it out here. Those with PTSD usually tend to be very quiet about having it. I, of course, am the opposite of quiet. I want more awareness brought to this disorder.

Don’t worry, I am not as insane as I appear to be. My PTSD does in fact play a part in this flea story I promise.

As a matter of fact, let’s just get right into that shall we….

One of the things I do to help with my PTSD is light a fire almost daily from about August until May. Although I am also known to light a fire in 100+ degree weather as well. As you can imagine, we go through the firewood in insane amounts. So, my hubby was driving down the road somewhere and saw a sign that said firewood for sale. The price was $5 for a HUGE stack of seasoned firewood. So, of course, the Hubby stopped and bought an entire trunk full of firewood for $20! It was well seasoned too. We stacked it on our inside deck where my dogs LOVE to relax in the cooler weather. We have always stacked it there in the fall and winter before.

When my Hubby went to chop a couple of pieces of wood, we got all kinds of surprises. There were quite a few insects and their egg sacks living inside the wood. That is when it hit us…..this was the only thing new we brought in to the house and / or property. Hubby Googled it and there it was in black and white for us to see – after the fact….Firewood can indeed contain fleas and ticks. Needless to say…we decided to go with a different supplier. Lesson learned here folks!

What In The Hell Do We Use To Treat Fleas Part Of The Story?????

Please note that I grew up in a tropical environment that saw a LOT of fleas. We had a different remedy that we used back then with great success. It is no longer available in today’s market. Leaving to believe that it was not as safe as we thought it once was. I started looking into non toxic, all natural flea and insect killer. I found something called Food Grade Diatomaceous Earth. It is the broken down remains of ancient organisms called diatoms. Diatoms were organisms that closely resembled algae in nature millions of years ago. It works to kill fleas because these Diatoms have rough edges that act as razors when it comes into contact with fleas and ticks, slicing them open and killing them. You need to make sure it is actually food grade though. It is the only one safe to use on or near animals.

So, I bought a 40 lb bag of the powdery stuff, that resembles clay, after I did my research. Even with the research, nothing could prepare me for this stuff. I read to wear face masks because the powder  is so fine. It can irritate sinus passages and lungs.

So, we attempted to gently sprinkle it on all flooring surfaces and dog beds. You are supposed to leave it on surfaces for a minimum of a week. Yeah….after about 3 minutes we were ready to get this stuff vacuumed up and fast! It was everywhere!!!!! My beautifully cleaned house was now a light brown powdery mess!!!!!

We did what any person would do when they realized they had one heck of a mess to clean up…..We watched a movie in the dark.

By the next morning it was obvious that this stuff was coming up DAYS early instead of the recommended time of about 3 weeks or so! All my furniture was now brown. Every time we moved we blew up a HUGE puff of brown dust. My 4 yr old was at the worst height for it. Hubby grabbed his shop vac and went to town on it. We bathed the dogs and the kitten, who freakishly purred through the entire bath!!!

We dusted and vacuumed daily for weeks after.

Hindsight, we should have used this tool to apply the powdery mess to my floors. Wanna be smart unlike we were…..click here. I am not affiliated with Amazon. This is just the exact one that I bought. I thought I would save you the Google search for “Bug Powder Tool”.

Now Back To The Flea Story…

This is the lifespan of the blood sucking creatures I am hell bent on destroying.

The life cycle of a flea is resembles lice. You think you got the nasty, vile, things gone only to discover you missed an egg somewhere and you are once again polluted.  That is why it is recommended to either leave the stuff on your carpets for those 21 days or to reapply it to your home several times during those 21 days.

We opted to reapply it as I can not go 21 days without vacuuming. I have dogs that shed and a family. Just could not do it!

How The Story Ends…

It has now been a month. We finally are no longer puffing brown powdery stuff every where when we move around. No fleas either! Tsunami’s fur is finally growing back in.

So, was it worth it?

DO NOT USE YOUR GOOD VACUUM TO VACUUM THIS STUFF UP. The particles are so fine that it kills the motor. We used a shop vac and I am not sure yet if it still works or not. Hubby is afraid to test it right now.

IT GOES EVERYWHERE!!!!!!! I am talking from your ceilings to your walls and everything in between. So be prepared for it.

Little goes a long way. Be way more intelligent then I was and buy a bug duster like these….

Use a face mask when putting it down. You will thank me later!

Be prepared to change your AC/Heater filter early too. Like I have said throughout this whole blog post, IT GOES EVERYWHERE!

Make sure you are buying FOOD GRADE Diatomaceous Earth Powder.

I waited for a year before hitting “Publish” on this blog post. This was intentional. I wanted to make sure that this stuff actually worked for us before I recommended it to you all.

We have NOT had a flea (that we are aware of) since. So, I feel pretty safe with finally hitting the “publish” button on this post.

For those wanting more info on Diatomaceous Earth Powder ….

2 Replies to “A Flea Story”